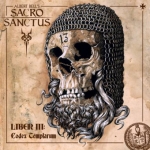 Often depicted as doomy, blackened Metal, these words are merely attempts to describe a sound that’s much easier to describe. Plain and simply… SACRO SANCTUS are Metal. Forget the sub-genres. Forget the obsession with pinpointing every little style in a band’s history. This band is good old-fashioned skull-breaking, demon-devouring, axe-wielding, soul-destroying Metal. And Albert Bell leads the pack with his powerful songwriting. Aside from his vocals, guitars and bass on the third album "Liber III: Codex Temptarum", Owen Grech (lead guitar) and Steve Lombardo (drums) round out the band. The prior album "Ad Aeturnum" from 2016 was a tough album to beat. But "Liber III", I think, has surpassed it in genuine fist-pumping, anthemic tracks that consistently lead the album from beginning to end. ‘The Widow’s Sons’ opens the album with an epic entry, heralding the cataclysmic battle for religion and lands to come. The guitars are a smorgasbord of straightforward riffs while Mr.Bell slightly growls in his singing. The lyrics "Betrayed by the king of war" (from ‘Into The Pyre’) reverberate into the aural uproar of guitars and slamming drums with an old school sound that doesn’t copy, but salutes the glory days of Metal we all grew up with. But don’t think the band is stuck in the past. By far, no. They simply emit a look back while also barreling forward into the new age of Metal. The third track ‘Order Of 13’ brings the feeling of standing in a crowd of dusty bikers in a bar near the edge of the desert listening to the band play, with a little MOTÖRHEAD thrown in for good measure. While the next track ‘To Die For The Cross’ conveys the image of warriors preparing for battle, ‘Warmonger’ is narrated by one chosen by God to help end the war. ‘Crown Of The Accursed’ is a song in three parts, maintaining its power and fury throughout its over seven minutes of mid-tempo beauty. ‘Bannockburn’ begins with some spoken word before erupting like an angry volcano into a thrash-filled, mosh-laden river of molten lava. ‘Mater Europa’ slows things down a little until the final track ‘Rosenkreuz’ wraps it all up with an energy reminiscent of a band wanting to do nothing but get the crowd on their feet and head-banging like it’s the last day on earth. SACRO SANCTUS makes it impossible to disappoint as they claw their way through the war-torn mire to triumph once again. With the band in an upward climb, the future holds a nice place in the heavens for Albert Bell and the gang. For more info, check out www.facebook.com/albertbellssacrosanctus and www.metal-on-metal.com