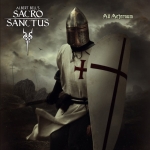 When it comes to writing songs about battles, crusades or medieval warfare, you usually think of bands with five or six members, playing various instruments and creating a thick layer of bellowing vocals and barbaric musical might. But occasionally you find that one man can do the job just fine. Hell, Rob Darken pulled us into pagan glory with GRAVELAND for a few albums. But with SACRO SANCTUS, Albert Bell carries on the full load in a musical journey that sounds like a full band. No Casio drums here. It almost makes you wonder why he contributes only bass to his other band NOMAD SON. The man is talented. After a brief intro, first track ‘Ad Aeturnum’ thunders into our ears with an anthem heralding in the battle-cry of soldiers from yore (hmmm, haven’t used the word ‘yore’ since BURZUM’s last album). This is music to drink to, to clink the steins together, to… well, you get the idea. But not in an ENSIFERUM way (not that that’s a bad thing). More in a sound of warriors marching into battle against the forces of tyranny and decay. ‘Terra Santa’ steps right alongside the previous song. ‘The Messenger’ has a feeling of doom to it. Not the plodding guitar drone of the genre of Doom. More like maybe things are going wrong in the marching camp. But also maybe like they’re taking a stand to overthrow their… ah, you know where I’m going with this. "Ad Aeternum" is an epic album with war cries, battle hymns and middle ages quests. Is there anything new here? Probably not. But as far as consistency and solid songwriting, SACRO SANCTUS doesn’t disappoint. ‘Hex and Heresy’ slows down the pace a little, giving our heroes a breather in their journey. Then ‘Seal Of Damnation’ steps up and kicks the ass of the gods who oppose the… Oh, here I go again. Enough of the epic words. Plain and simple, Albert Bell, aka SACRO SANCTUS, throws us a solid, enveloping Metal album of mighty proportions. This is a fun, fist-pumping album for the sword-carriers inn all of us. And did I mention this album has four covers? (each one is connected to a certain part of the lyrical concept of the album and you can decide for yourself which one you’d like to use as the frontcover, since all of them are part of the booklet – Frank) For more information, check out www.facebook.com/albertbellssacrosanctus, www.metal-on-metal.com.