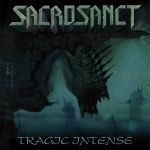 This is the third offering by Netherland’s Thrash act SACROSANCT before splitting up in the first half of the 90s. This edition has been remastered and re-released by Vic Records, good news, since has been out of print for many years. If you’re not familiar with this act it is good for you to know that his leader is Randy Meinhard, the guy who performed guitars on PESTILENCE’s classic first album. What can be found here? Well, some weird stuff… if you are not familiar with the most experimental sounds in Metal (and yes, there was more ‘weird’ stuff in the early 90s as seems to be). Released back in 1993 under the title “Tragic Intense”, this album shows some mature, experimental, sometimes eclectic kind of Metal, a new tendency in those critical post Cold War years (think about CORONER’s "Grin", ANACRUSIS "Screams And Whispers", PESTILENCE’s "Spheres", ATHEIST’s "Elements" or CYNIC’s "Focus", all of them released in the same year as the one I’m reviewing here). Production, song structures, arrangements, effects, drum patterns, everything seems to be far from their early past, where they used to play some kind of great progressive and technical Thrash Metal. I remember listening to this record some years ago for the first time and I was really impressed by their radical direction change (before this one I’ve already heard their two first albums: “Truth Is – What Is” from 1990 and “Recesses For The Depraved” from 1991, their best in my humble opinion). The music here is slow and could be defined as Thrash / Doom with progressive touches (yes, there is some well-known Thrash / Doom acts like DREAM DEATH or SEVENTH ANGEL). ‘At Least Pain Lasts’, the first track, gives you a clue of everything that is to come: clean vocals mainly, arpeggios, guitar effects, slow tempos and long songs (just check out ‘The Breed Within’ and ‘Cyberspace’, both reaching almost 9 minutes). ‘Fainted’, the third track, is a good example of what I’m talking about in terms of composition. ‘The Gathering’ is an acoustic guitar-oriented track from the very first seconds, while ‘Shining Through’ sounds like a modern Thrash song. This new edition contains one bonus track, which is another ‘Shining Through’ version, that appeared on the “This Stuff’s 2 Loud 4 U” split along with HAGGARD, TORCHURE and Germany’s PANACEA. I consider this stuff very good but it is not a record of pure Metal if you ask me, so beware if you’re not into this kind of eclectic stuff. Follow SACROSANCT on Facebook at www.facebook.com/sacrosanctbandofficial and if you’re an open-minded Metalhead or just want to hear something different from what you got in your extreme Metal collection go and get a copy at www.vicrecords.com.

SACROSANCT - Truth Is - What Is - by Miguel Negrón