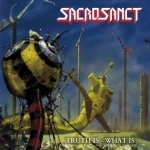 SACROSANCT is not a well-known name for the new generations of Metalheads out there… am I wrong? Everyone who was a well-informed Thrash and Death Metal fan back in the early 90s should have heard about them at least one time. This act was born after the departure of Randy Meinhard from PESTILENCE, the guy who performed on guitars in the classic "Malleus Maleficarum" plus "Dysentery" and "The Penance" demos. "Truth Is – What Is" is SACROSANCT’s first full-length, released back in 1990 under No Remorse and now is available once again thanks to Vic Records. Their music here can be defined as technical Thrash Metal with some progressive intonations and could be compared to institutions as CORONER, DEATHROW, ANACRUSIS, UNLEASHED POWER, SIEGES EVEN or HEXENHAUS. "Truth Is – What Is" opens with ‘Demension Of Violence’, a fine Thrash song where SACROSANCT shows all their potential: a brutal fast assault crowned with great guitar solos and some nice technical passages. My favourite tracks here are ‘Execrated (They Will Be)’ (give some attention to the keys reaching the third minute… you can hear some similar ideas that can be found in "Consuming Impulse"), ‘Terminal Suicide’ (because of its great riffing) and ‘Truth Is What Is’ (what a cool opening!). In my opinion, the stuff here was ahead of its time and contributed to the developing of a new sub-genre, the so-called progressive Thrash Metal. Just make some research and you will find relatively obscure SACROSANCT contemporary acts as GENETIC WISDOM, JESTER’S MARCH, SECRECY (Germany), TARAMIS, DEPRESSIVE AGE, ENTROPY (Ontario, Canada), CRIONIC, EQUINOX (Norway), MEGACE, BEZERKER, LOST CENTURY, DONOR (Netherlands), AFTERMATH (Illinois, US) and many more. The only thing that never convinced me 100% here is the work on vocals but in retrospective, this element gave them some identity. This new reissue contains the 1989 demo "The Die Is Cast". Here you can find some early versions of ‘The Sickened Thrill’, ‘Injured’ or ‘Disputed Death’. The work in the vocals department is developed in a slightly different way, sounding more aggressive than in "Truth Is – What Is". An interesting fact: Marco Foddis recorded drums on this demo (he left PESTILENCE along with Randy Meinhard to join SACROSANCT, but returned shortly after). If you’re deep into old school Thrash Metal this must be in your collection at any cost. Since SACROSANCT is active once again (they will release a new album in a matter of weeks), follow them at www.facebook.com/sacrosanctbandofficial. You can get a copy of this classic at www.vicrecords.com