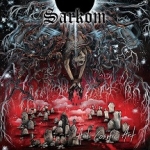 Apart from the band’s name, I totally missed out SARKOM from Norway, who are active now for over sixteen years. Partly I like Norwegian Black Metal but mostly it was simply to rough and monotonous for me. So SARKOM was a nice surprise again as their current material is quite varying with a lot of different influences combined to a good and solid mixture. The opening track ‘Previous Associates, Now As Targets For The Gun’ is finest Norwegian Black Metal reminding me of a band I used to appreciate quite a lot called GORGOROTH. Tight blastbeats and blistering guitars before turning into a really enjoyable Black’n’Roll monster in the end. Somewhere between classic Black Metal, classic Rock’n’Roll in the vein of MOTÖRHEAD and some Industrial influences, SARKOM have found their dirty niche and with tracks like ‘Seen Through The Eyes Of A Paedophile Priest’ or ‘Come, Dear Cancer’ the band vomits out their sarcastic version of Black Metal. Often kept in the mid-tempo section the band keeps it less brutal but very groovy over the most parts of the album. Using guest musicians from bands like TNT and SHINING, the guys do not hesitate to bring fresh influences into their sound. ‘Mind-Abscess’ and ‘Black Metal Necrophilia’ come along with tight drumming and cool riffing and solos. The vocals often vary between grim caws, effected spoken passages and punky screams and fulfill the good impression. Even though the mixing of the styles sounds weird but works out pretty well. Fans of later DARKTHRONE will not be disappointed I guess. Still the fundament is 90s true Norwegian Black Metal but with a quite modern painting and various influences. The final highlight of the album is a cover tune of SODOMs ‘Sodomy And Lust’ which stands out due to the fine riffing and cool vocals. A recommended album for open minded Black Metal fans of the second wave. More info can be found here: www.facebook.com/sarkom, https://sarkom.bandcamp.com, www.darkessencerecords.no