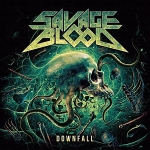 German Metallers SAVAGE BLOOD, with only one prior EP release, have created a full-length that swings back to the glory days of battles in a Power Metal vein while still sounding modern. In a genre that continues to push the boundaries into what’s heavy, and more extreme sounds, SAVAGE BLOOD give a ‘fuck you all” to the unintelligible lyrics and pay a throwback to classic-style, clean vocalled, anthemic riffs. ARMORED SAINT would be proud. Believe it or not, sometimes, we simply want to actually pay attention to the lyrics and sing along. Odd but true. There’ll probably be no severed goat heads or burning crosses during the live shows. And in this case, we hope there are not. “Downfall” starts off with a track of the same name which sets the stage for the whole album, with its chugging riffs and lyrics about the end being near. And of course, in a song about an epic battle, there’s got to be lines about blood on the hands of the army. ‘Release The Beast’ is a cataclysmic track where you seem to actually feel the earth shaking as it draws you right into the chaos. ‘Savage Blood’ sort of trounces upon you. Lyrically, throughout the album, it’s pretty simple and cliched. But that’s sort of how it is in this type of Metal. And we sort of bask in it. Anthems abound, especially in this track. ‘Violent Attack’ consists of the devil and his demons as ‘Queen On The Run’ is epic and catchy. If written three decades ago, we might’ve had the satisfaction of seeing a music video. The heavy bass thumps in ‘We Sweat Blood’. ‘Die In Spirit’ is your typical song about fighting for glory. The final track ‘Guardian Angel’ is a full-on aural emancipation of exactly what you want to hear in Heavy Metal. SAVAGE BLOOD are definitely a skilled, confident band who know how to bring forth the Metal the way it was intended. Here’s hoping for more great albums in the future. For more info, check out www.savageblood.de, www.facebook.com/savageblood.metal