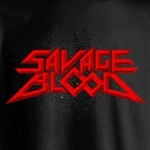 This self-released EP containing five tracks is the first and so far only release by SAVAGE BLOOD, a Power / Heavy Metal band from Germany with members of ENOLA GAY. They play very much on the melodic side and as the first song rolls out of your speakers seem to be very much influenced by NEVERMORE, mainly in the vocal approach. As the songs progress, they actually seem to increase the melodic overtones, and by the third track bring to mind HELLOWEEN circa 2000. True, it’s often aggressive and heavy, the guitars have punch and distortion, but at the same time it’s all too pretty and too modern sounding to my old battered ears, mainly the final tracks. There is a bit of a schizophrenic mix between those heavy guitars, even thrashy at times, and the riffing and singalong choruses that happily go everywhere. Still, many people are into this very melodic kind of German Power Metal, so if you are one of them give this a go. More info you will find at www.savageblood.de, www.facebook.com/savageblood.metal