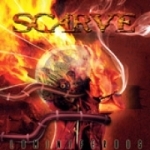 This is the sophomore album by this French sextet, and I must say that I listened their first album with distracted ears two years ago because the music did nothing to me, so I can’t comment on their evolution (or lack of) until today. Of course I carefully listened to “Luminiferous” from the beginning to the end before writing on it, and I am sad to say that the experience was of the painful type. The band comes out with what they may see as their “winning” formula to finally end with a disappointing and even sometimes totally irritating result. First, they have chosen to go along with two vocalists, one taking over the “melodic” duty, the other dealing with the “brutal” side of things. All I can say is that the result sounds really unconvincing, because the “melodic” parts made me think about some ugly so-called alternative crap bands of the nineties, while the “brutal” ones are nothing this side of CANNIBAL CORPSE. So, instead of trying to sit on two chairs at the same time, maybe the SCARVE dudes would have been better inspired to clearly chose their camp. One of the selling points of this CD is that Daniel Bergstrand helped to produce it, so I urge fans of STRAPPING YOUNG LADS and MESHUGGAH to listen to “Luminiferous” without delay, they may found it immensely enjoyable; to me this kind of modern (and yet dated in a sense) sound gets on my nerves very fast. The shame is that SCARVE’s highly skilled musicians end to sound like machines because of that trendy production. Nevertheless, I would like to give a special mention to drummer Dirk Verbeuren, because he graces us with his phenomenal talent throughout the entire album, a feast really. The main problem of “Luminiferous” though lies in the fact the band actually forgot to compose songs, complete with hooks and memorable moments: I defy you to remember a single track of this album, except maybe for ‘Serpent Speech’ that gives us an idea of what “Luminiferous could have been with better ideas and more work in the writing department, and guess what, this is the shortest song of the album, discounting the ‘The Day After’ ambient piece. OK, I think I have made myself clear on my feelings towards “Luminiferous”. As always, only your opinion counts, but you would have been well warned. The promo babbling talks about “new age Death Metal” and I can tell you that I am not anxious to see this new age coming, leave me in hell!