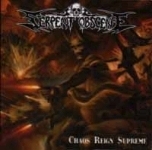 On the cover one can see an army of immortals unleashing a merciless attack and this scenario reflects the music perfectly. For nearly ten years SERPENT OBSCENE are torturing the world with their uncompromising Thrash / Death Metal. They simply manage to mix up the best elements of the two genres to build an unbending force. Thrash Metal based riffs join forces with the dark Death Metal atmosphere. All songs are played very fast, giving them a very aggressive touch. Sometimes a fine guitar-solo appears, embedded in mid-tempo part, but then it is again just “fast forward”. The band manages to keep up this high energy level, so there are no lame songs on this output, a total devastating assault from the first to the last sound. “Chaos Reign Supreme” is the third full-length release by this Swedish band, and it is really great how they perform technically brilliant yet without losing a sinister, apocalyptical atmosphere. Many bands (like KRISIUN on their latest release “Assassination”) did not manage to balance on that razor edge. Maybe there are people out there who are into discussing whether it is more Death or more Thrash, but I do not care about such senseless discussions. SERPENT OBSCENE – Death / Thrash at its best. www.serpentobscene.com.