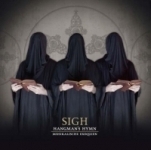 Japanese scene-veterans SIGH have always been a different breed. Bandleader, vocalist and commander-in-charge Mirai Kawashima is one of the very few composers in Metal whom I believe to have a profound knowledge and craftsmanship in music far beyond the limitations of the genre. Mind you that this fact alone doesn’t necessarily compliment their achievements. Their last record “Gallows Gallery” was massively influenced by psychedelic 60s-sounds, but failed on a grand scale due to the limitations of said Mirai as a singer who most certainly isn’t a second Brian Wilson. And trying to make up for that by hiding the voice between a vast amount of strange effects and sound-layers is simply not too good of an idea (the horror introduced to the Metal-world by CYNIC as the dreaded “Focus” – effect). But when they announced their next record as a mixture between German Thrash and German symphonies all that disappointment vanished in drooling anticipation. And boy did they deliver… Structured as a classical requiem, “Hangman’s Hymn” comes divided into three acts and in its entirety is nothing short of a masterpiece. Symphonic orchestrations, trailblazing Thrash-riffs, godly soloing (featuring a guest-spot by Rob Urbinati from SACRIFICE) and an overall atmosphere of hysterical madness make this the aural equivalent of Odin’s wild hunt on ecstasy. Especially the programmed orchestrations are among the most thoroughly arranged and natural sounding I’ve ever heard and let the unique talents of their maker shine in a way that strictly forbids any comparisons with the utter kitsch that the likes of DIMMU BORGIR or CRADLE OF FILTH created with real orchestras. Still they don’t take away an inch from the straight aggression and heaviness of the music, which is highlighted by a more than welcome return to the raspy sore-throat vocal delivery. In summary this is one of the precious few albums that unites the talent, attitude, innovation and insanity it takes to create something that truly stands out among all the mediocrity and boredom of today’s music-scene. Fuckin’ Über! www.osmoseproductions.com