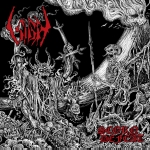 The legendary Japanese band’s first album originally released on Euronymous’s label DSP is re-released once more, this time with the "Requiem For Fools" EP, tracks from a split with KAWIR, the rough mix of the "Tragedies" demo, and the "Desolation " demo tapes as bonus content. New artwork was added by Hammer of Damnation for this version as well. Even at this early stage in their career, it’s obvious SIGH was experimenting with their style, putting in harpsichord music in ‘The Knell’ for example. On the other hand, it’s also obvious why Euronymous wanted them on his label. One doesn’t have to love SIGH to hear that their approach to Black Metal was different. I don’t happen to think this approach always worked out for the best on this album, or indeed on other albums too. The harpsichord tends to make great songs like ‘The Knell’ sound a little ridiculous. But, on a song such as ‘At My Funeral’ the piano part, while it isn’t absolutely stellar, actually doesn’t hinder the song at all, and accents it with a unique and bizarre vibe. The same is true of ‘Weakness Within’. Somehow I want to hate the piano but cannot. Can’t say the same for that harpsichord though! ‘Gundali’ isn’t much to get excited over but then you have songs like ‘Ready For The Final War’, which is great HELLHAMMER / CELTIC FROST style riffing. The guitar tone also somewhat reminds me of DREAM DEATH. Indeed, feelings of macabre, bizarre, and altogether weird things is, I think, SIGH’s main goal. The "Requiem For Fools" material is understandably rougher in sound and thus better than the album. The VENOM covers are cool but it’s the demos where SIGH was at their most brutal. Where "Requiem For Fools" sounded better than the album, the tapes are even better than that. The demo version of ‘Weakness Within’ has the keyboard sound that best fits in with what the rest of the band is playing. "Tragedies" is even rougher, and contains the most Death Metal song I think SIGH ever wrote, the short but sweet ‘Mentally Numb’. So with all that said, check out some SIGH. Even if you don’t like it you’ll at least expose yourself to something… odd. www.facebook.com/pages/sigh-official-page/227550909275, www.hammerheart.com