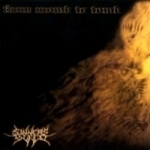 It’s been quite a while since I’ve been so much impressed by a self financed release! SINNERS BLEED are hailing from Berlin / Germany, have been around since 1997 and already released two demos previously to this debut full length (“Awakening” in 1999 and “Restless” in 2000). Unfortunately I missed out on both of them (as usual…), so I can’t really comment on their musical improvements. But fact is, that the band nowadays sounds so incredibly professional in every aspect, that I don’t really understand, why “From Womb To Tomb” had to be released without the financial help of an established label. So, for obvious reasons, another big fuck off definitely goes out to all the deaf, dumb and greedy trendhoppers out there… Instead of constantly trying to sign the next big thing from abroad, you better keep your eyes on the locals, as there’s quite a lot of potential to be discovered! Anyway, all those of you, who expect SINNERS BLEED to be an ENTOMBED inspired bunch of Swe-Death maniacs (because of their bandname), think again, cause these four guys are a lot more talented, convincing and brutal! SINNERS BLEED play brutal and very intense Death Metal on the highest musical level, mostly very fast (not grinding though), but with so many little bits and pieces incorporated that I could listen to the album over and over again, without getting bored. Some may call them “technical”, which they definitely are, but unlike most other acts of this sub-genre, SINNERS BLEED still focus on a fluent songwriting instead of simply building their music out of countless different parts. So, in this department they are certainly a lot closer to late DEATH than, let’s say ATHEIST, for instance. But while in DEATH’s case the overall brutality pretty much suffered from the increased technical approach, SINNERS BLEED are still very heavy and crush everything in sight without mercy. Another band that made a similar impact on me is NECROPHAGIST. This Berlin bunch combines sheer brutality with great guitarwork (they aren’t even afraid to incorporate little acoustic pieces) and furthermore often vary in speed. The production courtesy of Andreas Hilbert (formerly of GOLEM and FERMENTING INNARDS) couldn’t be any better and compliments the killer material in the best possible way! So, if you have been bored by the Death Metal genre lately, because most of the bands sounded too much alike to you or ended up using the frog-noise vocal style (which SINNERS BLEED luckily DON’T!), you need to check this album out for it is a real gem within the flooded market! Awesome debut! Contact: www.sinners-bleed.de, www.lostinberlin.com