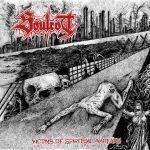 Valparaíso, is a port city on Chile’s coast. It’s known for its steep funiculars and intriguing, clifftop homes and former residence of Chilean poet Pablo Neruda. However, those Chileans formed SOULROT in 2013, nowhere near interested about surroundings or Pablo Neruda, rather laid down their souls to thy uncanny summoners of cosmogenic horror and preternatural forces. Let’s remember that SOULROT was formed by guitarist JL Olmos (BETRAYED, PUTRID YELL, CRANIAL, DISSIDENT, ex – FORKED, ex – THRASH ATTACK, ex – GANGRENOUS) in the year ’93 – ’94. Although it always remained buried, it was only in 2013 that it was reactivated when bassist / vocalist Jacob Wilschrey (BETRAYED, SADISTIC MURDER, LETHAL STEEL) joined force and gave resurrection to this beast. To consolidate this pact, Daniel Fredes (SADISTIC MURDER) also joins on drums. After their overwhelming debut album “Nameless Hideous Manifestations”, released in 2017 also by Memento Mori, they were able to firmly consolidate their musical convictions, deepening Death Metal sound that shakes our heads and makes us think of the Swedish school of the ’80s, as well as other great corners or scenes. SOULROT kneads pure bestiality into a compact, tight and at the same time insane sound and in their second studio album “Victims Of Spiritual Warfare”, they have managed to maintain the Nordic style, atmosphere and traditional insanity of old school Death Metal. Including several intros and samplers, forms of – apocalyptic speeches, noises or dark sounds that introduce each theme, this album consists of fifteen tracks with a playing time of 39 minutes; where on average each song lasts around three minutes! That actually works fantastically, because you won’t be able to lose attention anywhere. The combination of a super clunky HM2 sound and catchy yet memorable compositions are the most important part in this. From the beginning of the music in ‘Nihilistic Automata’, the band has given us a level of brutality and speed, that at times will remind us of the legendary TRAUMATIC, old GRAVE, DEMILICH, DISMEMBER or ENTOMBED / NIHILIST in their best times, but the massacre continues with ‘Buried Alive’, a short and intense song like few others on the album. ‘I, Master’ slows down a bit and plays more with the denser mid-times and riffs, something that offers a bit of a respite after the roasting start of the album. The intensity returns with another short-burst-top-speed steam locomotive ‘God Forsaken’, without a doubt a blow to the whole skull, just like ‘Chainsaw Worship Hymn’. And later, when ‘All That Remains’ appears with almost BLOT THROWER esque blistering structure and an uncanny solo, you will get the feeling, you have arrived in 1990 when mighty Scandinavian’s put ‘Dödsmetall’ on the map. Finally, approaching the end with the punkish manifestation in ‘Hideous Manifestation’ and crudest ‘What Destroys You, Makes Us Strong’, where the grinding sound of the trio becomes unmistakably deadly with echoing deep growls voiced by Jacob Wilschrey – like an evil reincarnation of L.G. Petrov. It probably never stops that Chile knows how to inspire the old schoolers and undoubtedly we are facing one of the best old school Death Metal albums so far this year, which demonstrates that Death Metal done in a creative and energetic way, has its place in a scene that on many occasions is obsessed with technique and virtuosity, losing the true essence of what this style means and here it is perfectly epitomized. Graced with stark cover artwork by Cesar Valladares (DECAPITATED CHRIST) and another molten mastering job by the esteemed Javier Felez at Moontower Studios, SOULROT‘s “Victims of Spiritual Warfare” speaks for itself and shall stand the ttest of time. Explore more about the band and label here at www.facebook.com/soulrotchile, www.memento-mori.es.