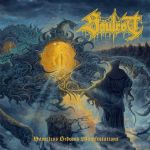 Through the past 30 years the Chilean Metal scene has unleashed some real great stuff upon our tormented souls in different styles (mainly Death and Thrash Metal), in no big quantities from such classic names as PENTAGRAM, ATOMIC AGGRESSOR, DEATH YELL, TOTTEN KORPS, DOMINUS (XUL), UNAUSSPRECHLICHEN KULTEN et cetera. This is also the case with Valparaiso based three piece act SOULROT. They have been around for over two decades, rehearsing here and there with the typical multiple line-up changes, but in the recent years the band finally found an stable base and took their work to a serious level. Their first effort was a remarkable debut demo entitled "Horrors From Beyond“ (2014), with 5 cuts of old school Death Metal in the Stockholm way, but also with a lot of local influences. With these cuts the band caught the attention of some labels but only getting a re-release of the demo through Unholy Prophecies and Morbid Bastard Records. Thanks to these deals the band started to gain more attention from the underground media as one of the new fresh (or rotten?) names in the Chilean scene. Then came a new release, the tape EP "Revelations“, again a self release, with 4 new cuts and 3 live songs, recorded in a raw way, showing a progression from their previous highly acclaimed opus. It was re-released this year on CD by Dark Recollections Records from Mexico. Meanwhile, the band recorded a new studio session, a promo single (firstly released digitally only) entitled "From My Grave“. This time featuring 3 cuts, one of them a well performed version of the NIRVANA 2002 classic ‘Mourning’. With all this hard work, the band got well deserved interest from several labels and the lucky bastards finally got signed by (the now classic) Spain based factory of horrors Memento Mori Records. The first abomination of this relationship is the debut album "Nameless Hideous Manifestations“. My first impression, just after checking its front cover and title, it’s a real tribute to the Lovecraftian universe and all the nameless horrors that lie within… After a loooooong intro, what can we say to describe SOULROT’s sound? Well, as I previously stated, it’s old school Death Metal in the Stockholm way, but please don’t think we’re in front of another Sunlight Studios clone bastard. Just like WORSHIP DEATH, another new Chilean highlight, the band has managed to get their own identity, based on classic influences such as NIHILIST / ENTOMBED, DISMEMBER, CARNAGE, GRAVE, et cetera, but adding a lot of the local traditional sound (TOTTEN KORPS, ATOMIC AGGRESSOR), plus some American influences like (old) IMMOLATION, BAPHOMET / BANISHED, et cetera. This long player (only available on CD and cassette formats, I’m dreaming of a vinyl release) features 10 cuts including an instrumetal. The opener, entitled ‘Desde El Arrecife Del Diablo’ (From The Reef Of The Devil…), is an appropriate kick off for this band from the Chilean Bay Area. Then hell breaks loose with ‘Those Who Dwell In The Abyss’ were we immediately can notice the band’s progress, the maturity of their own sound, mixing crushing guitars (thanks Satan for the HM Boss pedal!!), with speed attacks, sick breaks, mid tempos and guttural vociferations from beyond, reminding me of other (non typical) Swedish acts like GOREMENT and VOMITORY. But NIHILIST / ENTOMBED are guiding each of their steps in a majestic way, sometimes GRAVE comes to my mind, and AUTOPSY is another source of inspiration. The new renditions of such classics like ‘Ectoplasmic Revelations’, ‘Incorporeal Autopsy’ or ‘From My Grave’ are displayed in a superior way. We may miss some classic cuts like ‘Horrors From Beyond’ or ‘Awakening Of The Colossus’, but new classics like ‘Transfigured Through The Void’ or ‘Majestic Rot’ easily make up for it. Another highlight is the new version of ‘Blackstone’. Personal favourites: each track!!! I’m highly astonished by this record, a personal favourite for this year! I’m not recommending this record, it’s simply a MUST!!! More info at: www.facebook.com/soulrotchile, www.memento-mori.es