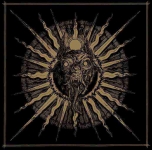 The name of this Icelandic band, formed in 2002, means "Black Death" and thus we can say their music style is that one. Maybe references to orthodox Black Metal bands will surely come to the minds of those exposed to this, their second full length. The first thing that strikes is their ability to do tons of riffs, one after the other, with a melodic yet eerie sound that grips the listener until the end. Also the band is quite comfortable playing in a variety of tempos from an upper mid-tempo to brutal Black / Death Metal vicious attacks. Comparing this band for me is not exactly that easy as if I can tell you I sense the essence of bands like early WATAIN to some atmospheres similar to those of TEITANBLOOD, yet with many references to older CELTIC FROST and even POSSESSED might just give you an idea. The vocals are also a big point here as it is not the typical Death or Black Metal voice, although those elements are there, there is a sense of despair and pain that can be heard in every word said in here. Also the drum work goes from bombastic to fantastic in every sense. This is a band that has already paid to Cronos, the father time, its price for delivering an exceptional execution and it is also blessed (or cursed) with a creativity that is hardly found nowadays. The words atmospheric and intense at the same time are things I have not used for describing a band in a while, but they apply here in a perfect form. At times the music and its intensity and technical approach reminds me of later DEATHSPELL OMEGA and why not, to the might GORGUTS. Maybe they do lost a bit of atmosphere in some of the faster parts, yet they are able to change tempos and speeds in such an easy way which can only be mastered through dedication to this arts of the dark. This is the kind of album that shines more and more with each listen, and has so many textures that those, who seek some of the best extreme Metal nowadays, will surely be pleased. A magnificent album. www.facebook.com/svartidaudi, www.van-records.de