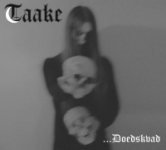 This album has touched me so deeply that I considered not to review it in the first place, because I knew at once that I was doomed to fail miserably trying to transcribe its beauty into words. Those who know TAAKE already will surely understand, and for them I can simply say that even if TAAKE have set the bar very high with their first two records (“Nattestrid…” and “… Bjoergvin…” they have crushed their own limitations (“limitation” in the TAAKE case already means “great inspiration” for lesser bands) in a way I didn’t expect it was possible. Vocalist / guitarist and above all song crafter extraordinaire Hoest is of course responsible for that. His talent for producing heart moving yet energetic Black Metal is without equivalent in the whole scene. The music on “… Doedskvad” reaches summits of complexity without losing its easy flowing character, each note or chord is here for a reason, hence the rich texture of the album. As usual sung in Norwegian (to be more precise in the dialect in use in the Bergen’s area), “… Doedskvad” could be seen as a succession of highly melancholic and mysterious sounding hymns (seven, as it is the custom with TAAKE), powerful yet delicate to the point I was on the verge to burst into tears, a feeling I didn’t experienced since the first time I listened to FATES WARNING “Awaken The Guardian” a long time ago. I realize I become a little too subjective here, too bad but I can’t help. And I don’t want to give the wrong impression: “… Doedskvad” is first and foremost a pure Black Metal album devoid of any experimentations (no keyboards, no samples, no industrial sound, no feminine voice, only guitars / bass / drums and a harsh voice), but at the same time showing the striking bewitching sense of melody which made the “Gothenburg sound” so appealing in the mid-90s. Bold parallels could be drawn between this album and SATYRICON “Nemesis Divina” but with the nuance that the former blows the latter to pieces dare I say. Performed by a core of four musicians with Hoest at command, “… Doedskvad” welcomes also a bunch of guests, among them Nattefrost and Nordavind to cite only the most known. And as usual for TAAKE, the album was recorded in the legendary Pytten’s Grieghallen studio, with the man himself turning the knobs. If you are out to be swept away by a dark wave of pure emotion and beauty, you know what you have to do. To me, this is simply the best Black Metal album EVER recorded. www.karismarecords.no, taake.cjb.net.