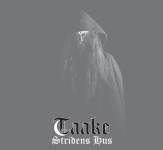 The line between genious and madman is said to be a razors edge, and the man behind TAAKE, Hoest has been called both more than once, while being accused of this and that. I have found him a genious since I first laid ears upon TAAKE back in the days. Cold, dark and atmospheric Black Metal with elements from Folk music hidden in the dark, as underplayed elements in the music, or as small instrumental treats, shortly featured here and there. This is the 6th full length album from TAAKE, and the third where Hoest is handling all the songwriting and recording by himself, though his current live line-up has picked up their instruments and recorded a bit on this album, if the rumors are true. The album is a bit more alive and diverse than TAAKE has been for a few years. Not that the band has done a bad recording in my book, though the power and intensity on "Stridens Hus" are more present and organic in its expression. A bit thrashy at times actually, not that it ruins the cold and dark atmosphere, that has been the band’s trademark throughout the years. This album by TAAKE did take a little more time than usual to get under my skin, I don’t really know why, as the mini album "Kulde" which was released prior to this album, hit me right off. "Stridens Hus" is more or less the continuation of that release, containing one of the tracks ‘Det Fins En Prins’ together with the title track ‘Stridens Hus’, which isn’t found on the album, oddly enough, or not, when having a mind like Hoest. Yet a sure fist in the face from TAAKE that will embrace old fans and make the easiest way into the band for newcomers, I think, as the album in some ways is more accesible than the older, though in others ways way more cryptic and complex as well. That’s the beauty with TAAKE, you never really know where you have him / them. Let yourself become embraced by the black wings: www.facebook.com/taakeofficial, www.darkessencerecords.no