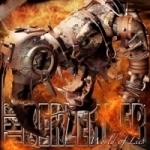 This is the second time I came across an album by the Aussies THE BERZERKER. The first time was 5 years or so ago, when they releaased their self-titled debut album which was anything but an outstanding release. Sadly enough, “World Of Lies” does not help to improve the mediocre portrait I was left with back in the day. After enduring the hard task of listening to this album I’ve been doing some research about the band and the different opinions people have about them and I’m honestly wondering if maybe the age has taken over my nerves or even worse! My toleration to that “hellish noise” – a quote that my parents often used to critizice my beloved Metal music – has diminished considerably. I’ve heard almost anything about this band from, “down-tuned cybernetic guitars” to “heavy and fast programmed percussive assault” and “passing through inhuman vocals” but honestly all those “terms” might be just desperate attempts to hide the rather poor band behind the nice words. Yes, they have SOME interesting riffs; yes, they write somewhat aggressive and corrosive music; yes, heavy as fuck but that doesn’t lessen the fact that this effort sounds like a garage-like garbage intended to be sold as “raw”, that you can sense some of the riffs only when the over-saturated drum machine diminishes its speed and a 20 min closing song that turns desperately annoying just after few minutes of listening. Sorry guys but I cannot recommend this album even to the worst of my enemies. Visit the band’s website at: www.theberzerker.com or the label at: www.earache.com.

THE BERZERKER - Dissimulate - by Phil Jonas