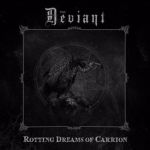 THE DEVIANT aren’t necessarily new kids on the block, the band has been around for almost one and a half decades now and all members have pretty much been around in the Norwegian scene from the 90s. I suppose it all shows up on “Rotting Dreams Of Carrion”. This is a very balanced record, the aggression is in the vocals, the riffs are your traditional Black Metal spirited dipping into traditional Death Metal tones. The songs are all mid-paced, the drumming on this album feels like a more traditional Florida Death Metal style. It really adds in the variety to this release. Tracks like ‘Son Of Dawn’ is where the band is at its best, the vocals lean both on Death and Black Metal approaches, although the song opens with a traditional Black Metal approach, it slowly moves towards a mid 90s Death Metal sound and is such a well written song. No complications anywhere, just pure kickass in-your-face Metal music. The band mixes approaches on all the tracks, sometimes the riffs get heavy, the vocals get screechy, solos get melodic and then in the next track the approach changes keeping the spirit intact. I won’t call this an exciting release, however this is an album with songs of consistent quality across. The drumming on track 5, ‘It Has A Name’, takes me immediately to Martin “Kiddie” Kearn (RIP). Perfect and on-spot every single second of the entire track. I thoroughly enjoyed this. If the band is playing in your area in the near future definitely go see them, this will be such a treat to experience live! On the whole, “Rotting Dreams Of Carrion” is a good release that you should definitely consider getting. Absolutely no downsides that I can think of but I wouldn’t call it the perfect album either. The execution is fantastic, a clear representation of the musicians and their skillmanship, beyond that however, this album doesn’t really do anything else. A quality release for your due consideration. For more information please visit www.facebook.com/officialthedeviant, www.facebook.com/soulsellerrecords