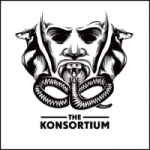 Stavanger. Norway. THE KONSORTIUM. Sounds like a combination either for a grim Black or old school Death Metal, doesn’t it? Let me tell all of you at first, Teloch, who’s the mastermind behind this Norwegian force of all evil, ain’t any green rookie as a musician. He’s already been a hired gun live for such Norwegian black flag carriers as MAYHEM, GORGOROTH and 1349 – as well as is involved with the line-ups of UMORAL, TEETH AND HORNS, NIDINGR, among others. Teloch’s idea about THE KONSORTIUM, has been around since 2003 already, but got flesh around its bones in reality just in 2011. The band’s self-titled studio album – with its 8 hard-hitting Black Metal tracks, offers a somewhat demanding listening experience all in all. The music in here could be described as a combination of  GEHENNA’s “Malice”, EMPEROR’s “Anthems To The Welkin At Dusk” and COVENENT’s “Nexus Polaris” eras, with experimental and avant-garde touches. Everything on this record, sounds really carefully done, well performed and all. Content-wise, the album is a very twisted, dark yet tasteful mix of atmospheric, multi-layered Black Metal that at times has – almost an operatic feel due to having King Diamond-like wailing falsettos incorporated in every now and then, Black Metal snarls and occasional growls keeping the company for most of the time through this ravishing ride on the record. The technical skills that Members 1, 2, 3 and 4 (as they want to hide their identity for some reason or the other?) execute from one song to the other, are exceptionally top-notch, strongly flagging for perfection – and in fact, there really is nothing there on this fantastically structured and executed offering, which would bring down the musical values the album has, to become one of better Black Metal albums of the year. Therefore it’ll be kind of interesting to see whether THE KORSORTIUM will be noticed globally even by a larger scale – and whether some major label may snap them soon because all the signs for becoming something bigger and more successful are already clearly in the air for them. Yep, this is such a great record from this talented yet somewhat mysterious group of Norwegian Metal musicians. I am positive that you won’t regret it a bit if you decide to check them out. www.myspace.com/konsortiummetal