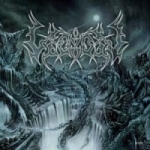 Founded in 1999 Swedish THE LEGION did not waste much time, put out the demo “Bloodaeons” in the year 2000 and after some line-up changes in 2001 released the stunning 7″ EP “Awakened Fury”, which presented vicous technically skilled Black / Death that united the typical hysterical Swedish grimness with the virtuous brutality of versatile Death Metal. In June 2003 “Awakened Fury” was reissued with a bonus track on Deepsend Records and I can only heartedly recommend this release. “Unseen To Creation”, which I shall focus on now, is THE LEGION’s first full-length and in contrast to the EP, which was recorded at Los Angered Studios, features typical Abyss-sound. But despite my personal reservations to the Tägtgren-bros, in this case their sound definitely fits to the music, because the parallels to the likes of DARK FUNERAL, DISSECTION and SETHERIAL are obvious. But THE LEGION add their own sense for Death Metal-like rhythms and heaviness to the mix and come up with a very fresh and inspired sounding record. Fast, cold and epic melodies intermingled with surprising breaks and twisted structures rather unusual for Swedish Black / Death define the sound of “Unseen To Creation”. The vocals could have been a bit less screechy, because the way they are they just resemble DARK FUNERAL and fail to meet the original quality THE LEGION’s music certainly has. After some time I got used to them and meanwhile I really enjoy this CD, because a mixture of the aforementioned icycold Swedish melodicity and MORBID ANGEL-like musical twists and turns is pretty fascinating… at least to me. If you like the bands I mentioned above or generally Swedish Black / Death that has a couple of new ideas and the feeling that bands like DARK FUNERAL or SETHERIAL meanwhile lack, you do no wrong when you invest your bucks in “Unseen To Creation”. Visit www.legion.nu or www.listenable.net for MP3 files and additional information!

THE LEGION - Revocation - by Torsten Gründig