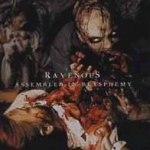 Combining an all star cast consisting of Dan Lilker, Killjoy and Chris Reifert, THE RAVENOUS’ take on savage and malign Death Metal is a kin to the mighty “Mental Funeral” album released by Chris Reifert’s former gore-mongers, AUTOPSY. Whilst there are glaring similarities between AUTOPSY and THE RAVENOUS, it must be said that AUTOPSY is still far superior. THE RAVENOUS takes some reference from the HELLHAMMER school of Metal with an emphasis on simplicity in places and as a result, the songs do tend to mesh into each other and lack any great individuality. Having said that, this is one sick record… rotten to its very soul and emanating a gruesome stench of death! It never was meant to be anything more than sheer self indulgence on the behalf of the members but it’s definitely not a release for those of you with a weak constitution!