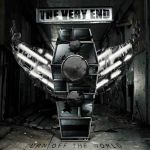 THE VERY END
Turn Off The World
(Steamhammer / SPV)
45:48min

The German five piece THE VERY END from the Ruhr area received a little bit of local fame here in Germany, due to their demo recordings in 2005 and 2007, respectively. Some enthusiastic reviews in the German Metal press put the name of these experienced, more old school based Metal musicians (NIGHT IN GALES, DESTILLERY and FLAMING ANGER, among others) on the map. Since these days, THE VERY END released three studio albums with “Turn Off The World” from 2012 still being the most recent of them. Yet they’re still active, so it might be due time to review their latest effort here. But I doubt that “Turn Off The World” could be of big interest for those readers who are into the old school of extreme Metal. THE VERY END are much more on the modern side of Thrash Metal, the songs on “Turn Off The World” remind me of the later efforts of IN FLAMES, before the Swedes started to use too much electronic elements, or the groovy and modern stuff OVERKILL released in the early 2000s. Thus THE VERY END are not really destined to hit my nerve. Under these circumstances, they put up a good fight, even though some songs like ‘Infidel’ or ‘Maelstrom Calling’ are way too trivial or even plain rubbish. On the other hand, there are fine songs like the bold opener ‘Splinters’ with its Rock’n’Roll styled intro and some lines of the lyrics in German or the melodic ‘Iron Sky’ that surprises with a nice classic Metal break. The more laid back ‘Sixes And Nines’ is not bad either, and ‘The Last Mile’ has some nice more classic and melodic breaks. Sadly this album gets pretty mundane towards the end until the final ‘To Feed On Hope’. This song convinced me even though it might be the most modern one on “Turn Off The World”, but KILLSWITCH ENGAGE are not better than THE VERY END here. All in all, “Turn Off The World” is one of those modern sounding more extreme Metal albums that are not bad, since THE VERY END is a band who at least sometimes remember the roots of Metal. If they ever release a new album, it could turn out to be a quite nice one as well, if they haven’t forgotten their roots. In case you’re not too close minded, visit www.facebook.com/theveryendmusic, or their company www.spv.de