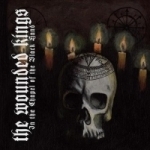 THE WOUNDED KINGS
In The Chapel Of The Black Hand
(I Hate Records)
42:10min

England is definitely a true home for Doom Metal in general. Without starting any name dropping in here how many totally amazing Doom Metal bands this country has spawned for us since the early days of BLACK SABBATH, it must be admitted that the Dartmoor-based THE WOUNDED KINGS are one of the most impressive Doom Metal acts that the country in question has ever produced to us. The story of THE WOUNDED KINGS started in 2005, and since then these psychedelic, dark and ridiculously heavy Doomsters – led by founding member Steve Mills, have delighted the Doom Metal world with 3 full-length studio albums, off which their latest titled "In The Chapel Of The Black Hand", would crush a few bones with its sheer heaviness if the music on it, could somehow be transformed into a form of something solid that one could actually touch to with a serious caution. What this reminds me of, there’s clearly an early MY DYING BRIDE vibe in THE WOUNDED KINGS’s crushingly heavy, sorrowful Doom Metal sound – added also with some similar musical references that could connect this 5-piece UK-act slightly to bands like BLACK SABBATH, PENTAGRAM, early CATHEDRAL and the likes. However, the most drastic change can be found from the vocal department this time, in which a female named Sharie Neyland takes care of the vocal duties, replacing George Birch who sang on the band’s previous two records – and doing an excellent job on that. Sharie may not be the type of ‘singer’ some of you might see her at first, but there’s anyway something really twisted and captivating in her ‘snarling-like-an-infamous-witch’ type of vocalism that fits perfectly into the band’s beautifully haunting, powerful and psychedelic Doom Metal compositions. Other than that, when the whole THE WOUNDED KINGS camp seems to reach almost the absolute perfection when it comes to making a spine-chilling Doom Metal that tends to raise every single hair on your skin, I don’t think you want to miss this record, unless you’re a complete fool, of course.  Whether THE WOUNDED KINGS have recorded their best album to date thus far, it’s really up to every listener to decide on his / her own. At least I gotta admit that in my books of respect and admiration, I do rank "In The Chapel Of The Black Hand" on a very high level in the band’s recording catalogue. Is this their most stunning album to date then, I hear you asking with a careful tone in your voice? Most probably so… www.myspace.com/thewoundedkings2, www.ihate.se

THE WOUNDED KINGS - The Shadow Over Atlantis - by Julián Núñez