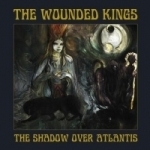 THE WOUNDED KINGS
The Shadow Over Atlantis
(I Hate Records)
41:35min

Doom. Doom… and doom again. Doom Metal can be a special kind of music. Most will take Doom for “slow” and which this might be true in a sense, real DOOM is more than that. It feels like a weight on your shoulder, like a dark evil shadow in a room, like a pain from nowhere… it is a trance, an hypnotic state from where few are invited to joy… to have joy in despair. Doom Metal, was created as the primordial form of Heavy Metal if we take BLACK SABBATH as the originators of a defined style. Yeah, punk added speed to the rebellious souls, but then again, sometimes rebellion is juts for those who are damned or condemned to a slow end. This is what you fell while listening to this second album from these miserable UK Doom masters. The tyrant guitars are predominant all over. The riffs are decadent, slow and pounding, whilst the melodies haunts, enchant and makes you travel through damnation. Comparing the band might be tricky as certainly CANDLEMASS, MY DYING BRIDE and early PARADISE LOST comes to mind while listening to the riffs and overall atmosphere, more akin to agonizing Doom / Death bands. But no, this one has a more traditional vocalist. At times it reminded me to REVELATION early efforts, which are also in the Doom category, although I would say that THE WOUNDED KINGS are more dramatic and more Metal, whereas there a re very few references to traditional rock music. Obviously some songs have a similar vibe like in ‘Baptism Of Atlantis’ which suddenly I felt to be in trance while listening to it. Although the band seems to be a foursome of lost souls, only two actually delivered the whole vision to bleak reality. And while the vocals might also sound the same, they do have a distinct passionate and agonizing effect, that also adds magic into the trance… Although there are only 6 songs, 2 of them are instrumentals, while the others are around the mark of 8 minutes or more each. The album ends with a great song with ‘Invocation Of The Ancients’. Traditional Metallers will probably find this one very hard to digest, and those possessed by speed will be surely drowned in a trance of slow sorrow that might not be what the hyperactive head banging medicine they need, but those into suicidal, gloomy, depressive and emotional music, can surely find a new altar of doom to make reverence. More info at: www.myspace.com/thewoundedkings2, www.ihate.se