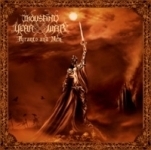 The American / Swedish line-up of THOUSAND YEAR WAR have surely listened to their AMON AMARTH discs back and forth; then aped the similar Viking Metal sound AMON AMARTH have, and done it without having any regrets or feeling guilty afterwards – or just whatever. Is there something bad about it then, may some of you ask? Well, I guess not but naturally it’s easy to stick to a generally accepted and popular recipe, knowing somewhere deep down inside your mind that obviously there surely are a bunch of Metal fans out there who’ll probably check your stuff out due to achieving something music-wise that may get your band associated with some bigger and more successful names around you. In that sense THOUSAND YEAR WAR have done a wise move musically for staying on those calm and safe seas, trusting 100% fully that one thought nobody is going to sink their long ship when going ashore on the already populated Viking Metal soil. "Tyrants And Men" is overall a great presentation of these guys’ skillful musicianship to create an easily adopted Viking Metal for the masses, and I guess nobody really cares anymore whether you may considered as ‘a little brother (or sister)’ of some more established act. What comes to this pure enjoyment level of "Tyrants And Men", there’s actually lots of bits and pieces to be enjoyed on this well crafted record – and even if many only seem to find AMON AMARTH’s strong ghost haunting everywhere within their songs, I would also like to mention that I found some already defunct Swedish melodic Death Metallers SACRILEGE’s flavors from the sound of THOUSAND YEAR WAR; especially from the "Lost In The Beauty You Slay" album era. Just go and listen to the album yourself – and start shaking your head as a sign of sheer acceptance how right I was for spotting SACRILEGE’s name out of nowhere. So there… A cover of ‘The Storm I Ride’ done originally by Abbath’s solo project I, was also surprisingly very well done by THOUSAND YEAR WAR – giving the track an extra kick of its own kind, I would say. With all these viewpoints that I wanted to bring forth about "Tyrants And Men", it can be assured we’ll perhaps hear a lot of more from them in the future. ‘AMON AMARTH 2’ or not, who eventually cares because THOUSAND YEAR WAR do sound great on their debut album nonetheless. www.thousandyearwar.com