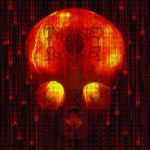 With “Gedankenglut”, we have the eighth and newest effort of the really long running (more than 30 years!) one-man band TRAUMATIC VOYAGE from Munich in Germany. Despite the fact that this project is around for that long time and released some of their albums with well-known companies, I never heard anything from them before. Maybe it’s because they are labelled “Avantgarde” and “progressive” Death or Black Metal, something I never really liked too much. And “Gedankenglut” seems to prove me right for not loving these styles of extreme Metal. But does the music really sound like it is described? Somehow not! Maybe the music TRAUMATIC VOYAGE delivers on this album should be labelled as “all too chaotic and unbearable” Black Metal on the edge of being ridiculous, since that was the impression I got listening to it. The intro ‘Ursprung In Den Untergang’ is just a harbinger of the chaos to come with the first two songs ‘Lux Vomica (Huminescence)’ and ‘Schinderspiel’. It sounds like a complete mess of instruments, mixed in the background while the priority is on the vocal deliveries of main man Mark Edward Astorian and his wife Unikhanya, shouting all over the place, adrift and without any recognisable structures. If there are instrumental passages, they are as messed up and ruin my nerves with a drum sound so bad that it is beyond any description. Remember that clinical e-drums from the 1980s? The drums on “Gedankenglut” sound like that, yet they are worse produced. Well, so much for complaining about the first two musical disasters. Sadly it won’t get any better in the too long run of the album. Songs like the cacophony ‘Irreligion’ or the silly ‘Der Weg Alles Irdischen’ with its off-tune sounding guitars are as much a pain in the ass! Of course the sound and the mix of the recording remains as shitty as it was. To be honest: TRAUMATIC VOYAGE really delivered a traumatic voyage through the abysses of dissonance and anti-music. “Gedankenglut” is the most intolerable album I had to listen to in years! In case you still consider checking it out: www.traumatic-voyage.com, https://traumatic-voyage.bandcamp.com and www.facebook.com/beyondandromedarecords