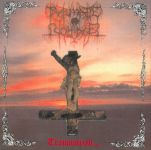 I had my first doubts when I looked at the cover artwork. An inverted cross. So far, so usual. But why is Jesus not turned upside down and for what reason is his left arm missing? My doubts grew bigger after the intro and the first notes of ‘Occultation’. Lo-Fi Black Metal with gargling vocals, a horrible drum sound and some clean female chantings. But unfortunately the one-man project does not leave it at that. During the next hour it is very hard to recognize any song structures, it is just a accumulation of sound bites. There are some moments which could be labeled as Suicide Black Metal or Funeral Doom, but those moments are flaring up for a few minutes and then getting destroyed by random noise or movie samples / spoken words. Sound-word collages would be a proper description. I guess the easiest way to approach "Traumatized…" is to consider the whole affair as art and not simply another album of your daily dose of Metal. More than once I caught myself wondering about the noise (was the radio in the kitchen still on, some kids playing in front of my apartment door or a drunkard yelling in the garage yard?) and initially I did not notice it is coming from my speakers. Surprisingly when listening to each track on its own I would say it is a deeply interesting interpretation of Black Metal, but it simply does not work for a whole album. So there remains an ambivalent impression of the second full-length by TRAUMATIC VOYAGE, originally released in 1996 and now re-released on LP. For all those who are curious enough to experience a very extravagant version of Suicide Black Metal TRAUMATIC VOYAGE is definitely worth a listening, especially when you are able to understand the German language so you are capable to feel the impact of the interspersed samples / spoken words. Otherwise I understand everyone well who considers this output a amateurish cacophony. So I guess the best idea is visiting www.traumatic-voyage.com or https://traumatic-voyage.bandcamp.com to make up your own mind.