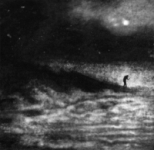 The darkness of this record is so all encompassing, I don’t know where to start. So let me start with the facts. TRIST is a solo project of one called (guess what) Trist. As a member of LUNAR AURORA (great German Black Metal band now on hold) he surely knows his craft. "Willenskraft" (Willpower), his third full-length, is a record about will, but not the will of some action obesssed man. This will is conceptual, standing at the centre of the universe, contemplative, uncompromising and neverending. It is expressed here with a massive metaphoric quality – the elements used to make a point are dark ambience of some underground sea, wailing voices of unmaterialized souls, marching rhythm with almost industrial feel. Brutal minimalism is the formula and it is done very effectively. The ambience of some tracks is awashed with the waves of heavy waters somewhat best expressed in literature by Edgar Allan Poe. Waters that engulf life and condense it in some form of dark alchemical matter with viscosity more dense than any liquid. This is interspersed with the deep sounding Black Metal guitars and MINISTRY-like mechanical drumming in a neverending pulse of a cosmic will. Vocals are burried somewhere in the middle of the sound so the listener gets a feeling of three dimensionality. You can almost peel this record and by removing layer upon layer you will find something unformed and menacing. It is real and charged with the meaning. Meaning that every listener should decode for himself. I glimpsed my meaning when I saw myself in the mirror after an hour of "Willenskraft" – eyes pitch black onyx stones full of symbolism that spoke of a world where the sun never really existed. The dark dreams of TRIST could be heard here: www.myspace.com/tristambient