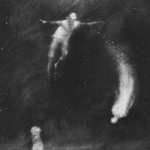 TRIST is a solo project of LUNAR AURORA’s Aran (who calls himself Tristan here) and as far as I know, this is his first (official) musical sign of life. "Hin-Fort" turns out to be a very demanding and extremely self confident release, not only because of its lengthy playing time, but also due to the fact that on disc one, there’s only one single track (‘Hin’) with a playing time of 60 minutes (!!), while disc two at least comprises of seven songs (with a similar total playing time). It might be some sort of concept album, but I’m not sure about that. The music has got a very hypnotic and monotonous approach to it and is a lot closer to a movie score than what LUNAR AURORA had come up with in their career. If it wouldn’t be so extremely long, it could also easily fit as an intro to a Black Metal album. There’s a lot of sound-elements to discover, spoken passages, but no real vocals and the majority of the album is very repetitive. What really fascinated me about the whole record nevertheless is the fact that even though the fast parts on disc one are almost compareable to industrial sounds at a factory, Aran still managed to keep my attention until the very last note of silence. It’s almost like you fall in trance while listening to it and your subconsciousness embraces all the little melodies in the background that won’t let you go until it’s over again. Very tough to listen to as you really need silence and enough time for it (the atmosphere of the music only works if you listen to it in a row, without any interruptions), but nevertheless pretty exciting as a whole and if you’re open minded enough for something different worth being checked out. www.cold-dimensions.de