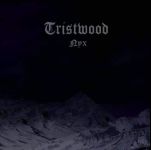 TRISTWOOD have been terrorizing their home country Austria for 19 years already with their fast and blasting amalgam of Black Metal, Death Metal, Grind and a slight dose of industrialized sounds and samples. They will be releasing their seventh release at the end of this month entitled “Blackcrowned Majesty” but what blasts out of my speakers right now is their fifth release “Nyx” from 2019. Judging from the dark coverpicture of a mountain during the night “Nyx” is of course revering to the impersonation of the Greek Goddess of the night – and not the German slogan “von nix kommt nix” (“Nothing comes out of nothing”, in case you want to impress some German speaking friends with your profound knowledge). The record is divided into three chapters covering recording sessions compiled from 2007 to 2015. The first chapter “Letha” starts with ultra fast drum machine driven Black and Death Metal with a slight HM2 touch on the guitars and rather deep vocals. A hint of ZYKLON and BELPHEGOR can be heard here and there. The production and the mix is quite good although it reeks of endless sessions of drum programming, guitar plug-in studying in front of the computer screen in an ass charming office chair. Track two ‘Typhoan’ starts groovy but again is send into blast heaven where it stays until the rest of the song. The riffs are good but nothing you have not heard before somewhere but you don’t know exactly where. Closing the first chapter is the headbanger friendly ‘The Grey Wanderer’. Everything is well played and programmed, especially the drums, but still they lack of dynamics due the the nature of the sound samples. If that does not bother you “Chapter I” is quite diverting. ‘Back From The Void’ opens the second chapter in a similar furious blasting way, but with a slightly more muffled sound. Aha, this must be older. Here and there the aforementioned industrial sounds come into play, although mainly used as sound gimmicks or small Dancefloor (you read correctly) intermezzi as in song five ‘The Grey Pantheon’. Song six ‘Angstkriden’ (sic) is in the similar vein, the vocals are doubled here and there by a deep effect voice which sounds as if recorded at home on a volume so low that the neighbours will not call your grandmother and make her erasing you from her testament. The last chapter is just one song, ‘Obsidian Lounge’ and it starts with a long intro and an even more muffled sound which totally sounds like computer, computer, computer. It is quite obvious that TRISTWOOD learned a lot about programming and mixing during the years stretching over this release. So what is left to say? It is a demo, a good one, and makes me wonder how their next record will sound (Ok, I have heard one track already and it is quite promising). The riffs are not bad and well played, the songwriting is ok, the effort the guys put into their music is huge, the dedication is there… but… I wish they would spend more time in a rehearsal room to get a feeling (!) of what they write and compose and then hand over the production to someone else to give the next fucker some life!!! Even in death. You can listen to “Nyx” here. More TRISTWOOD info at www.facebook.com/tristwood-117030138385682