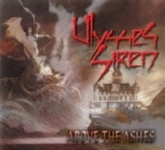 If a band still knows to impress these days in a really big way, with material that originally was written, recorded and released about 15 – 17 years ago, there obviously must be something special about ’em, don’t you think?! Well, ULYSSES SIREN is such a phenomenom! Just like fellow San Francisco Metalheads WARNING (S.F.) these guys unfortunately never really got the opportunity to release an album back in the glory days of the Bay Area scene. But that doesn’t necessarily mean that they didn’t deserve it or weren’t ready for it yet. Not at all!!! Judging ULYSSES SIREN just by their two demos (“Terrorist Attack” from 1985 and the 1987 demo), that both got nicely compiled on this disc here, they really had a bright future – even more promising than a lot of the bands of the 2nd or 3rd generation of Bay Area Thrash from that area. These youngsters here had everything you could ask for in a Metal act: they were highly aggressive, yet came up with very strong songwriting skills / musicianship and over the top, incredible riffing! Unlike WARNING, who in comparison were a bit more along the lines of traditional Metal, ULYSSES SIREN were way more Thrash infected and therefore a lot closer to old EXODUS (especially the riffing often reminds me on the alltime classic “Bonded By Blood”), very early METALLICA (when they were still labeled a “Speed Metal” band) or some old DEATH ANGEL (when it comes to the aggression and screamy type vocal delivery!). Imagine a mix of all that together and add the intensity of vintage SLAYER on top of that (especially Manual Lopez’ high screams often remind me on Araya in his heydays!) and you’ll get the picture! In other words, pure fuckin’ Thrash Metal at its best! So, make sure to support these guys and get yourself a copy of “Above The Ashes” immediately, cause if you miss out on this killer act, you’re definitely not Metal! Label contact: www.Relentless-Records.us, Relentlessrecords@hotmail.com, for more info on the band check out: www.ulysses-siren.com. In Europe the CD is available for 10,-Euro (with a printed / newly designed cover / backcover from this address: Heinz Konzett, Wingat 17, 6822 Satteins, Austria