Pure uncompromising Thrash? Well ULYSSES SIREN falls into that category and considering that they have some hot actuality surrounding them, here’s old Metalhead / songwriter extraordinaire Jon Torres back in action in Voices to reveal you more about this uncompromising legendary act!


As unexpected as it could be for the long time Bay Area Metal follower that I am, ULYSSES SIREN did reform last year also featuring almost the original line-up. Tell us more about how it came to life as it was a killer surprise… how did you get the other guys to do it after all those years especially since ULYSSES SIREN were a real underground act?
"It really started quite unexpectedly. I had decided to re-record ‘The Noose’ with WARNING S.F. and was thinking about using ‘Leviathan’ as an intro. That was a big mistake, but it yielded results. I got a phone call from Steve Pickering (guitar) that was completely unexpected. He started the conversation with “I heard you’re using old SIREN material", and wanted to know what I had in mind for “his“ song. It wasn’t "his“ song to begin with, and we had a quick chat about the finer points of entertainment law, and the conversation changed from being rather nasty to being very civil in the space of about three minutes. There seems to be quite a bit of the “My Song“ syndrome going on these days. Anyway I had my brother Steve at a disadvantage… it seems that he had suffered a severe spinal and other bodily injury’s from a bicycle accident that had caused him to lose most of his memory. That last memory that he had of our relationship was that we had a problem with each other. He had no recollection of us mending our relationship 11 years before that. I had to basically walk him through quite a bit of history before we could come to a common ground and move forward. Since that time Steve and I have become the best of friends. I told him that I would like to re-record some old SIREN tunes and possibly put out a new ULYSSES SIREN record. Steve was a bit reluctant at first, but agreed to at least hear if the other members were interested as well. I got in touch with Manny (Lopez – vocals) and J.R. (Clegg – guitar / bass) and they were interested, but all of us had one major concern, Steve Heuser (drums), the number one cog in the gears of despair, as far as the demise of ULYSSES SIREN is concerned. I talked to J.R. about Steve H. and it seemed that he hadn’t really grown up since the old days. I finally got in touch with Steve H. and the situation was that either I had to buy or rent a drum kit for him – because Steve had smashed most of his old kit and sold the rest of it for dope! – or ULYSSES SIREN was not going to happen. I got the kit and we got together for the first time in 11 years. It turned out pretty good for the first rehearsal or two." 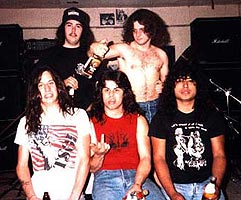 By June 2002 you managed to play a reunion gig which was impressive to say the least, as the old tunes sounded nothing but killer, no down tuned shit here, only ripping old tunes played the old way, and ended the set with an EXODUS cover of ‘And Then There Were None’ in memory of Baloff.
"The reunion show almost didn’t happen. We’d finally sorted Steve H. out and then Mr. Clegg started to be a problem. We had discussed from the onset of reforming ULYSSES SIREN that J.R. and I would no longer switch off on the guitar and the bass as we used to do back in the old days. This became a lingering problem especially with possible discussion of re-recording some of the old songs. Out of nowhere we were offered a gig at the Tidal Wave show in Mc Claren Park in S.F. – that’s when SIREN started on a downward spiral. We had almost two and a half months to get our set down and we couldn’t even manage that because of J. R. and Heuser mostly. We had to cancel the show because about two weeks before the show we stunk so badly that we had decided not to do the show at all. I got a call from the promoter begging us to do the show, and to work it out with the members in the band so that we could make an appearance. We had been talking about Boo Boo – Joe Jimenez who I had replaced back in 86 – for a few weeks before that and finally rang him up and actually asked him to come through and try out. He already knew the three tunes from the first demo and part of ‘No Trace Of Shame’, so it came together much better than I expected. We had to let J.R. go and that was hard, but it had to be done. We played the show and it went pretty well for the most part… a few mistakes here and there, but nothing major. We did play ‘And Then There Were None’ in memory of our fallen brother Pavel. It was a great song to end the set with… a lot of oldschool bangers were at the show and a bunch of them came up onstage and sang the dedication with us. It was a great moment. Hopefully we can do it again sometime in the near future." 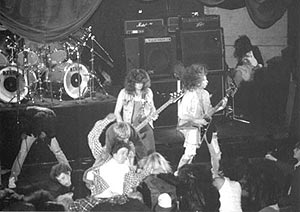 By the way, few people know this but you did play bass for EXODUS at Paul Baloff’s last gig in Sacramento on 1/16/02, two weeks before he died. How did that come about and what can you tell us about Paul considering that you knew him for a very very long time and shared the stage with him since ’82?
"Yes indeedy speedy! And speedy it was. I had just walked in the door from a long road trip to Texas and back, and there was a message on my answering machine from Gary Holt (EXODUS guitarist) about filling in on bass for an upcoming EXODUS show. I rang him back and he said that Jack (Gibson) had booked a room and had a pass for the N.A.M.M. show (N.A.M.M. is a musical instrument convention the hold every year in L.A.) and couldn’t cancel his plans so would I like to do the show with them? I said sure and started learning or more like re-learning the tunes for the set. We practiced once for about two hours and didn’t even run through the whole set… the next practice Tom got pulled over by the cops and thrown in jail so that never happened… that’s the way it is with EXODUS… never a dull moment! I practiced to the CDs we did 15 songs and it was a great show! I’ll never forget it. I knew Paul for 21 years… He lived Metal every day of his life and gave it all he had up until the end. You could see that Paul was having problems toward the end though. His speech was slurred and he really had a hard time concentrating. It was hard to witness and know that there was nothing you could really do about it. I still think about Paul from time to time and have a laugh about some of the times we got ripped and raged together. Priceless!"

Early 2003 saw Relentless Records release an ULYSSES SIREN album titled "Above The Ashes" featuring the two demos that were recorded in the 80s, both being re-mastered, remixed and as a result the album can be simply be added to the list of all time top Metal releases from the Bay Area. How do you feel about this release? Do you think it was the best choice to retain that particular vibe from the 80s to use those recordings rather than re-recording the material?
"I feel really happy and proud that it has finally been released. We appreciate the top Metal releases comment as well… I feel really good about the release through Relentless Records and all the help we have received from both Heinz Konzett and yourself… cheers again my friend. In regards to the music itself… it is the clearest and best sounding reproduction of the two demos ever! Thanks to Justin Weis at Trackworx Studios. I really do think that those songs needed to be released as they were recorded back then. There was talk of re-recording some of the songs on the second demo because the original master tape got recorded over… fortunately we tracked down a ¼ inch mix down copy of the second demo that sounded amazing so we decided to use that. I think the record sounds really good for the era in which it was recorded. See for yourself… go to www.ulyssessiren.com, and have a listen or contact us at ulyssessiren@hotmail.com"

Despite the hope we had to see ULYSSES SIREN coming back to life for good, it seems the band has problems again with Heuser. Tell us what the status of the band is right now, as it seems you have started writing a new album with other members…
"At present ULYSSES SIREN is Manuel Lopez (vocals), Steve Pickering (guitar), Jon Torres (guitar), Joe Jimenez (bass). We are in the process of writing new songs and finding a new drummer. Steve Heuser is just not an option, I will leave it at that. Replacing him will be no easy task, but it has to be done. Steve P. and I have started writing new songs and Manny and Joe are doing the same. The only change in this current line-up is going to be a new drummer… the other members are solid and permanent."

Musicwise, can you give us an accurate description of how the newer stuff will sound considering that old diehard fans are looking only for stuff that sounds like the old stuff?
"As accurate as possible I guess… ULYSSES SIREN will be as intense and insane as we were in the past or we simply won’t do it any longer. I see absolutely no reason to change anything except the recording process and some possible musical twists that we never could get around to back in the day because of certain band members. I’ll keep you posted."