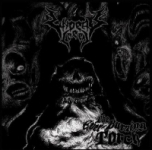 Well, you don’t have to live in Sweden to deliver authentic Svensk Dödsmetall. Italy also seems to be a fine breeding place for traditional Swedish Death Metal. You surely will recognize that while listening to UNDEAD CREEPS’s debut album. Sure, one can say that’s not new and that’s not original. Damned, I don’t care about originality as long as it’s not just copying and if it’s done with passion. And exactly that’s the case here with UNDEAD CREEP. You can feel the enthusiasm of those four Italian fiends in every unholy note performed on this album. This is Death Metal the way it should be: dark, sinister, brutal and spiced with great guitar leads and morbid melodies. The opener ‘Immolated For Reincarnation’ is a briskly headbanger in the vein of the mighty ENTOMBED debut. Aaarrrghhh, what a killer song!!! And all other compositions are on the same level. Hell yeah, "The Ever-Burning Torch" is a tremendous collection of ten pure fucking Death Metal hymns. As mentioned before originality is not their mission but creating awesome songs with soul and atmosphere without just cloning some ENTOMBED or DISMEMBER classics. The production is powerful and sounds very gloomy and natural. Sandro the vocalist did an excellent job; his malicious voice fits perfectly to this kind of music. Artwork and packaging are cool, too. Dark Descend also added the four songs (plus intro) from the remarkable 2009 demo as bonus. So there is definitely no excuse for not buying "The Ever-Burning Torch". This is a must have for every self-respected Death Metal fan. www.myspace.com/undeadcreep666, www.darkdescentrecords.com