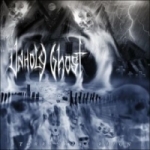 At last a true masterpiece for a change… When I heard the band’s first and only demo, issued last year (2003), I knew at once that something special was happening in Floridas swamps. So I longed for this album anxiously, and I am not disappointed by the result! Mark my words: UNHOLY GHOST is the best classic devilish Death Metal act in activity today in the whole world. You think I am exaggerating? Well, let’s open the treasure chest “Torrential Reign” truly is and examine what we get here. First and foremost the music is brilliant, brutal yet very delicate. Producer Juan Gonzalez did the job of his life, giving UNHOLY GHOST an almost aerial sound that underlines the fantastic musical abilities of this four piece. Thanks to that, it becomes obvious that Aantar “Blastmaster” Coates is really a gifted drummer (I have never doubted of that personally), at ease not only when it comes to blast, but also on the more “relaxed” moment. Indeed UNHOLY GHOST don’t inflict us an all and out high speed festival, but they know also how to calm down the pace for the sake of the song variety. In that regard ‘Cross Contamination’ and ‘Denunciation’ offer good examples of superiorly composed songs, alternating groovy riffs with all of a sudden outburst of pure violence and hatred, while the – to me – absolute best track of this miraculous release (‘Entrenched Warfare’) features a mid-paced killer and unforgettable main riff. Considering the fact that three quarters of the band come from DIABOLIC (with the addition of ex – PESSIMIST guitarist Kelly McLauchlin), it is stunning to hear how much they have progressed in a little span of time, to the point I have my doubts regarding the actual freedom these musicians really had in their former band. “Torrential Reign” features the three tracks of the band’s demo in an of course more polished guise, even if I think that ‘Under Existence’ lost a little of its efficiency here (the main riff being a little bit simplified). All the ten songs on offer here (discounting the outro) show outstanding guitar and vocal technique, with a real sense for creating haunting and disturbing atmospheres (quite logical from a GHOST!!!). The shadows of POSSESSED and MORBID ANGEL fly all over this disc as UNHOLY GHOST reconnect us with the exciting Death Metal scene of old, when leather, spikes and blasphemy ruled supreme. Here lies the main talent of this band, and this is the most important to me: these four musicians are Metal fans to the core and it shows. You can’t fake this enthusiasm and this rage to share something special with your audience, your community. UNHOLY GHOST offer us the best album they were capable to conceive musically, lyrically and visually. This is the best Death Metal your money can get, and yet you will feel you have received a gift. I am not afraid to call this album a milestone in Metal music, regardless of the genre.