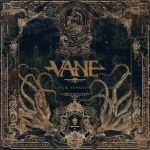 VANE is a new Polish band but with members that have quite some experience under their belts, that releases their first album in a self-financed way, yet presented with a very professional form, adding to it some videos done in a very pro way for the promotion. Their style is that of a melodic Death Metal band, with a lot of Heavy and Speed / Thrash Metal influences. Also at times there is a good dose of PANTERA influence. The band keeps it playing in a mid-paced way heading more towards the upper-tempo ways, but never really speeding up but for just a few bits here and there. At times they sound a bit too much like some Deathcore bands, yet I think it is just a mere coincidence. At the end, the band sounded to me like a mixture between AMON AMARTH and FORBIDDEN with the aforementioned "Cowboys From Hell" riffs. As a matter of fact, the vocals, that are mostly growls with some few cleaner parts, I think that might be better in a more melodic Bay Area melodic style than what they use. The production values and execution are very high, and the two videos I have seen so far are also very well done, so fans of similar style bands will surely appreciate this. Their lyrical approach is about histories of Pirates and the perils of the sea. Although I am not exactly that fond on this particular style, I cannot deny the quality of this release in all aspects and reccomend it to fans of the genre. www.facebook.com/vane.band, https://vaneband.bandcamp.com