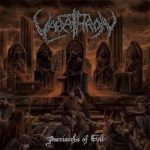 Lucky for me, I’ve always been a VARATHRON fan and I still am. This Greek band is very special to me, because "His Majesty At The Swamp" is one of the very first Black Metal albums I ever bought back in the early 90s. VARATHRON was born in 1988 and after 30 years they still sound like in the beginning of their career, but clearly with a more experienced and fancier approach. Nowadays, in a scene full of clones and anonymous acts, it’s pretty rare finding a band with its own sound and VARATHRON achieves this aim: recognizable, uncontaminated and true to its roots. "Patriarchs Of Evil" is their sixth full length album, released by the Polish label Agonia Records. Eight songs for almost 46 minutes of Hellenic Black Metal in its purest form. As in their previous albums, the occult aura is still intact and present: listening to this album, is like a descent into the Hades Underworld. The dark atmospheres are, as always in their discography, the strongest point of VARATHRON’s songwriting with tons of obscure, heavy and mystical melodies. Here we have a very intense, coherent and impressive guitars work: catchy, thrashy, gloomy, epic, sometimes aggressive, sometimes theatrical and doomy with a bunch of interesting acoustic parts too. Another killer point is the drumming: tight and complex both in the slow parts and in the fast ones. Each instrument is very well played and is cemented perfectly in an amalgamation of melodies, rhythmic dynamism and Stefan Necroabyssious’ ritualistic vocals with his typical alternation of growlings and whispers. Then we have a majestic cover artwork and VARATHRON’s classical lyrics that mix occult themes and mythology. To me this new release reaches the level of "His Majesty At The Swamp" and "Walpurgisnacht", but with the advantage of being enriched by a real drumming and not a drum machine. "Patriarchs Of Evil" is a top quality album from a top quality band, that hasn’t changed its style and its magical touch through the years, contrary to what other Greek bands have done, switching from Black Metal to Gothic Metal. If you’re into legendary names such as NECROMANTIA, ROTTING CHRIST ("Thy Mighty Contract" and "Non Serviam" era), ZEMIAL, very early SEPTICFLESH etc, I think that this is a worthy addition to your collection. More info here: www.facebook.com/varathronofficial, www.agoniarecords.com