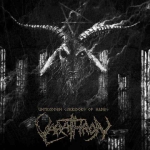 Even though VARATHRON are one of the oldest Greek Black Metal bands and therefore can be seen as some kind of institution, they completely passed me by until now. Maybe it’s because I’m not too much of a Black Metal freak, maybe it’s due to the fact that I haven’t heard any good Black Metal from Greece yet. So I can only speak about “Untrodden Corridors Of Hades” here, the fifth full length album from VARATHRON, asides from a bunch of splits, EPs, demos and compilations since 1989. The first song ‘Kabalistic Invocation Of Solomon’ starts of with a kind of ritual as an intro, fitting the title, before VARATHRON start off with a mainly mid to slow paced tune that just made me think of older SAMAEL. Sadly this misses the final kick, just as if the Greeks were doped up on Valium. The following ‘Realm Of Obscure’ is a lot better, the band released the handbrake every once in a while to unleash fast outbreaks, spiced with fine melodic guitar leads that appear a little bid ancient oriental. With ‘Arcane Conjuring’ VARATHRON slow down again, but we have a lot more atmosphere here, thanks to the ritualistic groove. And those really brilliant guitar harmonies really spice things up. ‘Leprocious Lord’ is once more on the slow side, and even though it speeds up towards the end, it misses the vital spark. But the next one, ‘The Bright Trapezium’ starts off rather furious, guided by choirs to underline the atmosphere. Yet there are some slower and even pretty quiet parts here as well, calming the fury of the main theme. The epic and again ritualistic ‘Death Chant’ convinces with a very charming dark atmosphere that somehow reminded me of NECROS CHRISTOS. And once more, the guitar leads are very fine here and get guided by atmospheric choirs again. Maybe this one is the essence of the whole album, at least it’s the highlight for sure. The final ‘Delve Into The Past’ is a long and, concerning Black Metal, complex song with lots of tempo changes and some fine ideas as well, yet it doesn’t completely come to the point. So we have an album that has its brilliant moments and some fine songs, but some unformed songs on the downside. Maybe I should check out the past releases of VARATHRON to find out if there are more of those fine songs. In the end, there’s some information for those collectors out there: “Untrodden Corridors Of Hades” is also available as box set with an extra CD full of rare tracks plus additional stuff like a patch and a poster. More about VARATHRON at: www.varathron.com, www.facebook.com/pages/varathron/225214390860932, www.agoniarecords.com