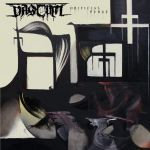 VASTUM’s new record “Orificial Purge” is out on 20 Buck Spin and absolutely delivers what Death Metal fans are craving for. Before focusing on the music I have to admit that I’m absolutely amazed by the bands general aesthetics as “Orificial Purge” again delivers a very unusual and unique cover-artwork which immediatly sets them apart from all other current Death Metal acts. Another big thumbs up for fact that the artwork itself really manages to represent the music you hear on the record, which is also a rarity nowadays. But how does the music sound? There’s actually three words that can sum up “Orificial Purge” in order to provide an accurate roundup: dark, grave and real. Since we are talking about Death Metal here, there’s of course a zillion bands out there that capture a certain kind of darkness in their sound, so this is nothing special to begin with. What sets VASTUM apart is the graveness and realness that is such a big part of the material on “Orificial Purge”. The songs sound like VASTUM and nothing else. There’s no trendy psychedelic or classic Rock influences to be found, nothing that screams “we want to be successful”. It’s just a big pile of rotten, mid-paced, churning, guitar oriented Death Metal. Both sides of the record start with atmospheric interludes which are followed by approx. 15 minutes of death set to music. While the record itself functions best as a whole, the third track, entitled ‘Abscess Inside Us’, sticks out as my highlight of “Orificial Purge”. Weird time-signatures, a catchy verse section, riffs, riffs and even more riffs make this one my personal song of the record. Besides the great material, VASTUM also managed to provide a proper production which is very natural and organic sounding. In order to provide a ffo-suggestion I’d highly recommend this record to everybody who appreciates the outputs of NECROS CHRISTOS, as VASTUM manages to capture a similar atmosphere. You can check them out via www.facebook.com/vastum-440192535391 and www.20buckspin.com.