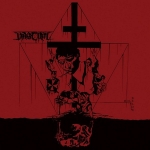 VASTUM from San Francisco, California unearthed in 2009, and have since then, or at least since 2011 when they released their first sound "Carnal Law", been spewing forth dark and unrelentless Death Metal, grim noisy riffs, midtempo punishing drumming, a low low rumbling bass, grim guttural growls and a raw production that pushes forth the gloomy and doomy riffs. The second attack "Patricidal Lust" was unleashed in 2013, an album that took the raw darkness a step up in refinement, without getting any less grim and eerie, quite scary stuff at times to be honest. Now we are writing 2015 and VASTUM is yet again ready to conquer hell and lay earth barren. VASTUM has taken it a step further this time as well, the mainbase of the music is still gloomy Death / Doom Metal with wicked riffing and haunted growls. Though the ambience has been stepped a tad up, the atmopshere on the recording is so thick and gripping, that it almost is alarming, as some might be sucked too far down the vortex, for never to resurface again. The sparse use of synth does the album really good, it drags the atmosphere a tad further into obliveon and underlines the score. The wicked guitar riffing and incredible melodies the band has created for this album are also incredible, and is also a big part of lifting "Hole Below" to heigths I didn’t think VASTUM ever would reach, together with the crushing heavy production, all this without losing the original eeriness, rawness and darkness, that are such a big part of the band’s identity. There have been some great Death Metal releases so far this year, though I think this one is the one that has hit me the hardest. I actually didn’t think the band could top "Patricidal Lust", though they’ve blown that album out of the water, with the added technical and melodic riffing and progressive songwriting, without losing the most important doomy and dark touch, and the thick thick atmosphere, that smothers me as a deadly fog, let me drown in it! Step further into the darkness: www.facebook.com/pages/vastum/440192535391, www.20buckspin.com