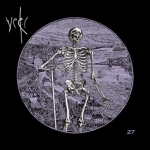 During the last years, there have been some pretty promising acts from Hungary. SVOID and the mighty GRAVE CRUSHER blew up some dust in my flat, despite the fact that they are pretty different, stylistically. Now VEÉR from Budapest are trying to join these lines with their second album “27”. They released their debut “The Measure Of Waste” already in 2009 and before that, they were active as RAVENSHADES, having released only a few demos. Since I haven’t heard any tone of VEÉR’s earlier music, it’s up to “27” to make up my mind. And this album knows how to surprise and convince. Dark, pretty cold Black Metal is what we have here, that is based on mid tempo and in some moments reminds of early MAYHEM and their milestone debut “De Mysteriis Dom Sathanas”. But VEÉR are, of course, not a mere copycat, their sound is too distinct and much more rooted in daily real life and it’s psychic horrors. The opening ‘Sun Of Hate’ already surprises with its decent DARKTHRONEsque vibe and a nearly catchable desolation, accompanied by spartan melodies. Next we have ‘I’m Turning Into Your Cancer’ that is dominated by an even HELLHAMMER styled riffing and some more fine melody fragments. With ‘Asphyxiate’, we find some seizable despair wrapped by cold guitar lines that even spread an industrial atmosphere. The title track is another statement of grief and darkness, paving the way for the fantastic and rather fast ‘Fixing Your Grave, Son’ and its walk at the edge of madness. You can nearly sense the small abyss between sanity and insanity in the vocals. ‘The Undertaker’ is the only really fast song on this album, yet this one again has those guitar melodies that create the atmosphere of industrialized depression. In the end, ‘Streets Without Lights’ sounds as the title already promises, closing this great album rather soon. Well, not much more than half an hour might be short, but I personally think that it’s enough running time for an album that presents such dark and dismal emotions. Yet, the urge to listen to “27” again comes back pretty soon. As I said, VEÉR really took me by surprise with this album, and once more my appetite is whetted to put an eye on the extreme Metal scene in Hungary to find out if there are more gems like this. If you’re looking for some real good darker than black Metal with a dismal atmosphere look for VEÉR at http://cavernaabismal.blogspot.de, www.facebook.com/neverhearddistro or www.cavernaabismal.com