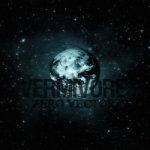 VERMIVORE is a 4-piece technical Death Metal (with slight Thrash Metal overtones) band from the northern part of Finland, Oulu. The band started out just in 2012 as a duo of the Haipus bros. (featuring guitarist Jari Haipus and bassist Juha Haipus) but evolved into a full band within a relatively short time. VERMIVORE’s debut outing, a 5-track demo titled "Zero Vector", opens a noteworthy-sized door for them into the vast realm of modern and technical Death Metal in a somewhat decent way. The guys sound pretty well rehearsed indeed, having put some of their collective ideas carefully together – and just made their best out of them on this over 16-minutes debut demo recording of theirs. Modern sounding Death Metal this definitely is, counting on a pretty virtuoso type of playing, in which sort level in extremity is reached a convincing way, too. To me they sound a bit like a cross of LAMB OF GOD and DEICIDE at times (especially riff-wise) although I’m sure a host of other band names will obviously be occurred in comparison to these young lads. Jouni Koskela’s vocals bring a similar type of vocal approach to my mind that it’s used a lot in a band like LAMB OF GOD; both screeching and more growling type of vocalisms are used equally within the songs, that really fit to their sound like a rubber glove into that-place-where-the-sun-never-shines. There’s certain charm to their modern Death / Thrash Metal assaults anyway, I wouldn’t mind by hearing a fell-length recording from them in the coming months either – especially if they can come up with more similar sounding songs to ‘The Milgram Experiment’ that has some nice DEICIDE-sque riffing present in it. "Zero Vector" is definitely a good start from these northern extreme Metal maniacs in VERMIVORE. Next time just try to pay more attention to some of those matters as far as the production is concerned, okay? Learn more about them at: www.facebook.com/vermivoreband