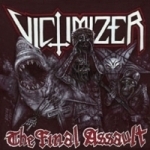 Another round in the proverbial bullet belt of Denmark, is Sjern based VICTIMIZER, a melodious thrashing foursome that have, unfortunately, decided to call it quits with this their debut CD now being released, aptly titled “The Final Assault”. A band I never heard before today or who has been seen within these pages. And as quickly as they have entered the scene (early 2000) they have since decided to pull the pin on the hand grenade around their collective necks and bow out in a hail of body parts! Truthfully this immediate and abrupt demise upon the threshold of their debut album’s release seems a bit idiotic, a bad idea to say the least, premature- if you wanted a more sterile, sanitary press statement, but altogether and most assuredly VICTIMIZER’s option for euthanasia is without question a seriously stupid move / wasted opportunity for any band worthy of this act’s musical proficiency or who could be lucky enough to get signed and endorsed by Hells Headbangers from Ohio. As not since the days when ARTILLERY, SAMHAIN / DESEXULT, MOURNER and INVOCATOR were the only viable options for maniacs in search of the next Speed / Thrash Metal unit of neck-wreckers, has this North Sea country of Denmark had a bona fide successor to those ancient blood thrones. Oh well… huh guys? Aeternum Vale! Produced by Alberto Gallista. Mastered by Jeppe Hasseriis. Cover art by Dennis Dread, additional CD art by Rafal Kruszyk. Expertly designed and layout by Eric “Horror” Horval, complimented by a full color heavy card stock grade booklet and tray insert. Be sure to stop by the band’s www.myspace.com/666victimizer and leave your commentary, tears or fuck offs about this ridiculously promising band who pulled an absolute boner to end their career before it even had a chance to effictively get off the ground. Contact: throneoffire@hellsheadbangers.com or www.hellsheadbangers.com or www.victimizer.dk