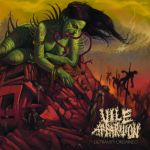 Death Metal and Australia? Names like MORTIFICATION and ARMOURED ANGEL come to mind easily, but that’s it. Yet, the seed of Metal was always planted in the land down under. With VILE APPARITION, we have a pretty new band from Melbourne. Formed out of the ashes of SEWERCIDE by Jamie and Ollie as a duo, they recorded a first demo after a short time of existence before Dave and Dan completed the line-up. A split EP with INCINERATOR from Poland last year was their first release as a full band. Now they have their first album out. “Depravity Ordained” might not add something new or innovative to the idea of Death Metal, but fans of especially American old school Death Metal will get their money’s worth for sure. Rough and rude in riffing and production, VILE APPARITION take no prisoners and give us old school maniacs a full treatment in Metal of Death. Especially the second half of the album, with songs like ‘Repulsive Desire’, the fine massacre ‘The Gate’ and the final ‘Window Of The Grotesque’ they render their homage to the old heroes. Death Metal done right I guess, and a great find for those who can’t get enough of that wonderful stuff. As a bonus, Memento Mori added the four songs of the demo tape to the CD version of “Depravity Ordained”. Despite sounding much quieter compared to the album, the three songs plus one intro from “Atrocious Captivity” already showed how the wind blows for VILE APPARITION. Of course the demo songs are a little more crude, but this doesn’t harm the joy. And the final ‘Fearless Deity’ is a fine ending of a cool record. Visit www.facebook.com/vileapparition or www.memento-mori.es for more.