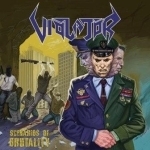 Brazilian Thrashers VIOLATOR’s fast and vicious Thrash Metal ain’t necessarily any rocket science so to speak but whenever they do something, the strongest spotlights seem automatically to get directed to them. So happened last time with the "Chemical Assault" album back in 2006, even making internationally known Earache Records interested in these furious Brazilian Thrashers that they decided to re-issue the album for Europe, and release it as LP eventually. Since then it’s been pretty quiet in the VIOLATOR camp although "Annihilation Process" saw the light of (bad) day in 2010 on Kill Again Records. For many it’s a somewhat disappointing release as the bar was risen so high on the band’s debut album: people clearly expected much more from VIOLATOR on "Annihilation Process" but obviously got less or even much less. 3 years have passed by and VIOLATOR is back with the band’s 3rd full-length Thrash massacre, titled "Scenarios Of Brutality". "Scenarios Of Brutality" could actually well be considered some sort of return to form from VIOLATOR, remembering which types of things made "Chemical Assault" such a relentless listening experience for all of us. What "Chemical Assault" was all about, it was all about a striking and ambitious songwriting, in which sharp, in-yer-face riffs, sort of ‘take-no-prisoners’ type of attitude, menacing drum work of Batera and things like those, made it such a great yet highly enjoyable record eventually. I don’t know if I am becoming deaf or not but I do dare to claim "Scenarios Of Brutality" is even a tad better attempt from the VIOLATOR kill team to thrash our heads off the shoulders. Again, this is a very strongly riff-based effort from these Brazilian blokes; the attacking riffs are basically everywhere on this record, dominating VIOLATOR’s all attempts to become your very favorite Thrash Metal act of today’s world of Thrash. This may be a shot in the dark, but in a way I could imagine combining SLAYER’s "Reign In Blood" with VIO-LENCE’s "Eternal Nightmare", to get out something like "Scenarios Of Violence" content wise. I mean, if you remember how downright ferocious and violent sounding both "Reign In Blood" and "Eternal Nightmare" turned out to be when they first came out, "Scenarios Of Violence" comes frighteningly close to the same enthusiastic feelings and vibes that both of the aforementioned 2 albums offered to their listeners back in the day. In other words, "Scenarios Of Violence" could be named as "Reign In Blood" or "Eternal Nightmare" of this ongoing millenium – such a violently thrash-tastic release it absolutely is. Dig it. Love it. Suck it. Whatever… 100% Thrash quality guaranteed!! VIOLATOR: www.facebook.com/violatorthrash, label: www.killagainrec.com