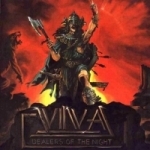 It really was about time that this album would finally be re-issued as people already tend to pay ridiculously high prices for the original CD version. “Dealers Of The Night” was the third full length album of this Hannover based fivepiece (following “Born To Rock” and “What The Hell Is Going On”) and also their “breakthrough” release (approx. 250.000 sold units in Europe). The reason for its success (apart from the great looking fantasy cover art) was probably the song ‘Some Kind Of Wonderful’ (a cover tune) which became a big hit in several rock discotheques at the time and immediately increased the band’s popularity. That’s probably also a big reason, why in most people’s opinions “Dealers Of The Night” is VIVA’s best offering. Well, even though it certainly has its moments (the titletrack ‘Dealers Of The Night’, the quite heavy ‘Looking For An Answer’ or the poppy ballad ‘Spend The Night’ are standouts), I always preferred “What The Hell Is Going On” over “Dealers…” for the simple fact that the combination of Barbara Schenker’s keyboard melodies with the band’s straight ahead Hardrock and Marc Paganini raw voice just fitted together a lot better. While “What The Hell Is Going On” somehow stood the test of time, “Dealers Of The Night” partly sounds a little dated nowadays and people who don’t know VIVA from the early 80s probably won’t get into it anymore. So at the end of the day, this is nothing more than a re-issue for all nostalgic Hardrockers. But they will appreciate it for sure!

VIVA - What The Hell Is Going On! - by Frank Stöver