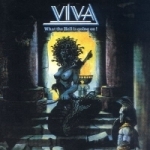 VIVA
What The Hell Is Going On!
(Axe Killer Records)
34:57min

I really wonder what people nowadays will think about this album who don’t remember VIVA from the early 80s Hardrock / Heavy Metal scene… Does the material sound dated?! I don’t know. Maybe it does… But as far as I’m concerned, “What The Hell Is Going On!” was always an essential release to me and I still recall that I used to play the vinyl version many many times (in turn with SAMSON’s “Before The Storm”, DEF LEPPARD’s “Pyromania” and TYGERS OF PAN TANG’s “Spellbound”) back in those days! VIVA was a five-piece band from Hannover, Germany and mainly got their media attention because of the fact that their keyboard player was Barbara Schenker, the little sister of Michael (MSG, UFO) and Rudolf (SCORPIONS). Even though they already released an album before this (the still pretty ridiculous and immature sounding “Born To Rock” in 1980), “What The Hell Is Going On!” was the first to be taken completely serious. VIVA used to play a very straight forward, melodic Hardrock / Heavy Metal, with emotional guitar leads in the typical Schenker tradition, effectively used, moody keyboards and a rough, yet melodic voice, courtesy of the Swiss Marc Paganini (who replaced original vocalist Frank Algermissen). “What The Hell Is Going On!” features a nicely balanced mixture of heavier tunes as well as a great ballad (‘Screaming For Your Love’) and to me always was the best VIVA album (even though their follow up “Dealers Of The Night” became way more successful). Theygot the talent, the right label to push them (CBS) and the looks to make it pretty big, but unfortunately the usual line-up changes killed the band on the long run. And their following kinda polished sounding albums “Apocalypse” and “Cream-Cake Box” are not necessarily of interest anymore for old VIVA fans. So, if you’d like to go on a nostalgic journey, pick up “What The Hell Is Going On!” and experience the magicof timeless Hard’n’Heavy music. By the way, it is the first time that this is available on CD (no bonus tracks, but impressive packaging). Now I just hope that Axe Killer Records will come up with “Dealers Of The Night” next.

VIVA - Dealers Of The Night - by Frank Stöver