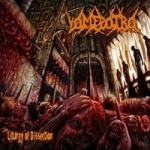 The putrid vomit zombies are back! The Brazilian VOMEPOTRO have returned with their second album titled “Liturgies Of Disscetion”, this time released by the American label Sevared Recods. Its predecessor “Zombie Gore Vomit” already showcased a load of great songs but this time, VOMEPOTRO have realized their potential to a even higher degree. The band still sticks to their mixture of brutal yet catchy riffing, spiced with some slams here and there, topped by sick and guttural grunts and some sparingly used screeching vocals, not unlike old CARCASS one might say. While the songwriting skills on “Zombie Gore Vomit” were already captivating, VOMEPOTRO have upped the ante here again to create a very brutal mixture that is at the same time very dynamic, jumping straight to the jugular, riffs leading to fast blasting climaxes or heavy passages and breaks. Fortunately the amazing lead guitars are again present, intesifying the brutality of the material as well as adding another dimension of musicality to the brutal Death Metal which is just not present in most modern ultra-gory bands. Played with lots drive and aggression and produced in a natural way, yet sounding thicker and more balanced than its predecesor, “Liturgy Of Dissection” proves to be a great album with staying power. The album closes with two cover versions, namely SEPULTURA’s ‘Mass Hypnosis’ and MORBID ANGEL’s ‘Dominate’, the latter in a demo version but at the end of the day both covers can convince. Thumbs up for this strong album which combines US brutality with South American sickness… and great soloing! www.vomepotro.com, www.sevared.com