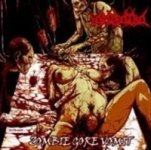 An eerie / atmospheric melody played by a pulsing analogue synthesizer as it is know from the scores of many certain Italian, Spanish and Brazilian movies, the album title, the band name… yes! Gore time! Cannibals are allowed as well, for that matter. These four putrid vomit zombies from Brazil have released their debut album after ten years of existence and several demos. Unlike many of their country mates, they do not sound a bit like KRISIUN. On the contrary, VOMEPOTRO walk the way of guts and gore in a way that resembles early DEEDS OF FLESH and Barnes era CANNIBAL CORPSE in the style of the relentless and catchy riffing. The great and harmonious leads are a perfect additional facet to the sound – thumbs up! The very deep vocals which verge on the ultra guttural are the most contemporary element one can find on “Zombie Gore Vomit”. Despite being not innovative a single bit (not that I care about that anyway) the album proved to grow on me as the songs are all well structured pieces of brutal mid-nineties Death Metal with so many catchy riffs, a fair bit of grinding which is not absurdly fast, headbang – provoking passages and breakdowns topped by skilled leads and solos so this shrivelled clump of filth oozes flair, definitely. Somehow I am reminded on the german GOMORRHA who go in a similar direction. Soundwise one can’t complain as well. The production is relatively clear and on par with the “standards”. The cover of “Zombie Gore Vomit” will surely be appreciated by all fans of gory dark I might add… The song ‘Aborted Fetus’ as well as some tracks off their demos can be found on VOMEPOTRO’s homapage at: www.vomepotro.com. Label website: www.obscuredomain.com