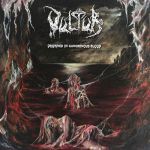 The Greek Death Metal scene in blooming, heavy, dirty and grimy as fuck Death Metal is emerging around the globe, as it was spewed forth by the flame on Mount Olymp. VULTUR is one of those bands, a band consisting of members that have had their go in various bands in the Greek Metal world, two from one of my favorite Greek Death Metal bands as we speak, ECTOPLASMA, the bassist George Wolf and growler extraordinaire Giannis Grim. VULTUR was formed in 2013 and has two full length albums under their belt, and this, their second is my first encounter with the band (ohhh the horror, I have to get into the earlier stuff sooner than later). An old school and crunchy guitar sound drives the music forth, the drumming is to the point and brutal, with an awesome live-like sound and punch, the bass rumbling and controlling and the vocals commanding and entrancing. Doomy Death Metal with some horror elements and an overall dark and grim atmosphere, packed in a very fitting raw old school production with good dynamics, this is straight up my alley. Lots of pace shifts and different riffing and leads to spice it up, varied rhythm patterns and a hell of a vocal attack, this is good! Enter the funeral pyre: www.facebook.com/vulturathens, www.memento-mori.es